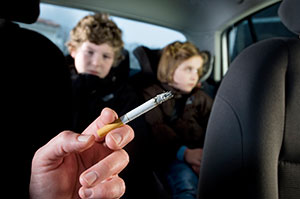 The health dangers of breathing secondhand smoke have been known for over 30 years. As a result, 40 states currently have different types of bans on smoking in public places, such as public facilities (like schools, hospitals, airports, bus terminals, parks, and beaches) and some private businesses (like restaurants and bars). In addition, the federal government bans smoking on commercial flights and in federal government buildings.

These bans have likely reduced children’s exposure to secondhand smoke. Yet, children remain at risk when family members smoke. For example, when children ride in cars, or when a child has asthma or another type of lung disease that can be worsened by exposure to tobacco smoke, secondhand smoke could be hazardous as well. Such concerns appear to be an area of current state policy efforts. In fact, seven states have enacted laws that prohibit smoking in cars when children are present, and another four states have cities or counties that have similar bans.

The C.S. Mott Children’s Hospital National Poll on Children’s Health asked a national sample of adults for their opinions regarding smoking bans in a variety of locations where children are present.

Support for No Smoking Policies Related to Children

For all of the potential smoking bans to reduce exposure to secondhand smoke, parents of children <18 years old are more likely to strongly support/support the bans than other adults, as are non-smokers compared with current smokers.  However, even among current smokers, there is broad support for bans that would protect children from tobacco smoke exposure. For example, for a ban on smoking in cars with children < 13 years old present, 60% of current smokers strongly support/support such a ban, compared with 84% of former smokers and 87% of never-smokers. 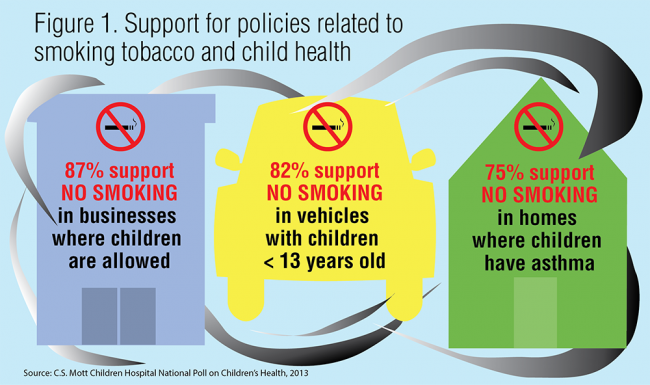 The majority of states (40 of 50) currently ban smoking in public places in one form or another, in order to reduce non-smokers’ exposure to secondhand smoke.  Twenty-eight states and the District of Columbia ban smoking in all enclosed public places, while 10 states (Alabama, Alaska, Kentucky, Mississippi, Missouri, Oklahoma, South Carolina, Texas, West Virginia, Wyoming) have not enacted any general statewide smoking bans.

Until recently, smoking bans were not directly focused on protecting children’s health. However, in 2007 the American Academy of Pediatrics began advocating for specific legislation to prohibit smoking in cars with children present.  Between 2006 and 2011, four states (Arkansas, California, Louisiana and Maine) enacted statewide bans on smoking in vehicles carrying children, and in 2013 three states (Illinois, Oregon and Utah) enacted similar laws.  Four other states (Hawaii, Indiana, New Jersey, New York) have cities or counties that ban smoking in vehicles with children present.

The results of this Poll indicate that support for smoking prohibition related to children’s secondhand smoke exposure is broad across the country. The highest levels of support, for bans in businesses where children are allowed, corresponds well with bans in public places present in most states, and raise the question of whether such bans should be national rather than state-specific. Currently, the federal government prohibits smoking on commercial flights and in federal buildings.

High levels of support for banning smoking in vehicles with children present indicate that the precedent set by a small number of states, counties and cities may be ready for broader adoption across the country. We are not aware of laws at this time that prohibit smoking in homes where children have asthma or other lung conditions. However, the broad level of support in this Poll for such a policy raises the question of whether legislation on this topic may be possible in the future.

This report presents findings from a nationally representative household survey conducted exclusively by GfK Custom Research, LLC (GfK), for C.S. Mott Children’s Hospital via a method used in many published studies.  The survey was administered in June 2013 to a randomly selected, stratified group of adults age 18 and older (n=1,996) from GfK’s web-enabled KnowledgePanel® that closely resembles the U.S. population The sample was subsequently weighted to reflect population figures from the Census Bureau. The survey completion rate was 58% among the panel members contacted to participate. The margin of error is ± 2 to 3 percentage points and higher among subgroups. 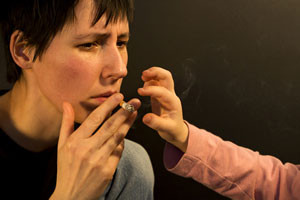