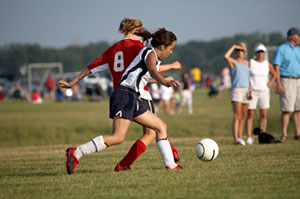 A growing body of research has demonstrated long-term negative effects of repeat concussions in athletes, particularly in children and adolescents. Along with coaches, trainers, and health care professionals, parents play an important role in minimizing the risk of repeat concussions.

To explore parents’ perspectives on concussions among young athletes, the C.S. Mott Children’s Hospital National Poll on Children’s Health conducted a national survey in May 2010 of parents whose children 12 to 17 years old play school sports.

Results of this poll indicate that parents’ knowledge of concussion risks is fairly limited. Only 8% of parents have read or heard “a lot” about the effects of repeat concussions, while 36% have not heard or read anything on this topic.

Despite their lack of awareness, parents of young athletes have concerns about concussions: 18% are “very worried” and 45% are “somewhat worried” that their children will get a concussion while playing school sports.

Parents give widely varying estimates on the amount of time that children 12-17 years should sit out after a concussion. About one-quarter felt that one week or less would be fine, while about one-fifth thought it should be more than one month. Sixteen percent felt there should be no specific duration of time before a young athlete returns to play after a concussion (Figure 1).

Are Schools Prepared for Concussions?

As perceived by parents, schools differ in their current services and policies to ensure the appropriate care of young athletes who sustain a concussion. Among parents whose children 12 to 17 years old play school sports, more than half report that the school has a certified trainer onsite for games, but fewer indicate that a trainer is onsite during practices. Only 36% report that their children’s school has a policy about returning to sports after a concussion, while more than half are unaware of any concussion policy (Table 1).

The majority of parents support specific policies related to concussions sustained in school sports. Parents most strongly support requiring a doctor’s clearance before athletes can return to play after a concussion, and requiring coaches to receive information about the risks of concussions (Figure 2).

Garnering the least amount of support among parents is a requirement that schools have a certified trainer or other health professional at both practices and games. There is disagreement on how to fund such a requirement, with parents preferring the following sources: 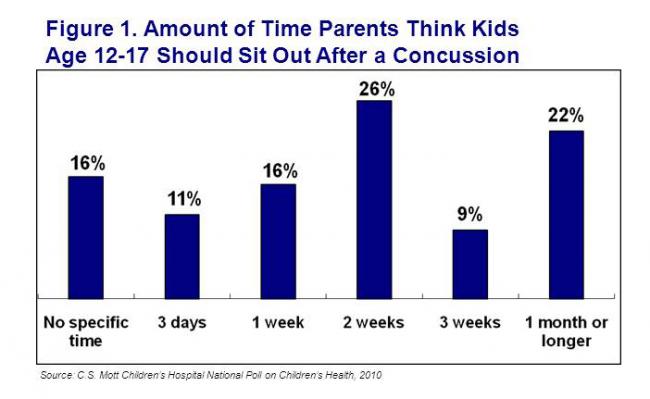 Among parents whose children 12 to 17 years old play school sports:

Researchers have found that youth athletes are more likely than adults to sustain concussions and to take longer to recover. If a repeat concussion occurs before a child’s brain recovers from the first, there is an increased chance of long-term neurologic effects. Based on this research, there have been growing efforts to minimize concussion risks for youth athletes. High school athletic associations, injury prevention organizations, and even professional sports leagues have promoted the implementation of concussion policies, which typically include removal from play for any athlete suspected of having a concussion; clearance by a health professional before return to play; and education of athletes, parents, and coaches about dangers of concussions.

The results of this C.S. Mott National Poll on Children’s Health indicate substantial room for improvement, particularly in the area of educating parents. In this national sample of parents of young athletes, over one-third knew virtually nothing about concussion risks, and half were unaware of whether their child’s school even had a concussion policy.

On a positive note, parents do express strong support for school-based strategies to guard against repeat concussions. However, parents also recognize that some coaches, and other parents as well, would likely have a child return to play too soon after sustaining a concussion.

The involvement of parents in guarding against repeat concussions is critical. Most concussions do not result in loss of consciousness, and some symptoms do not occur until several hours or even days after the precipitating event. Young athletes may be reluctant to tell coaches or trainers about concussion-like symptoms, for fear of losing playing time. Parents, therefore, must understand concussion signs and symptoms and notify school and/or health care personnel if they have any concerns. 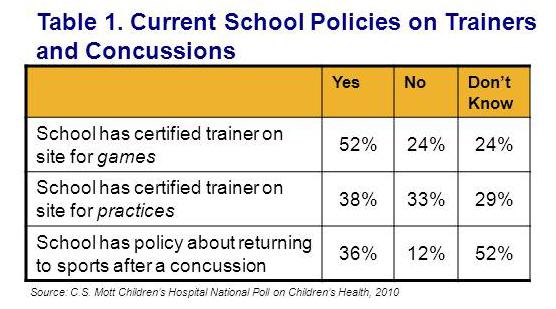 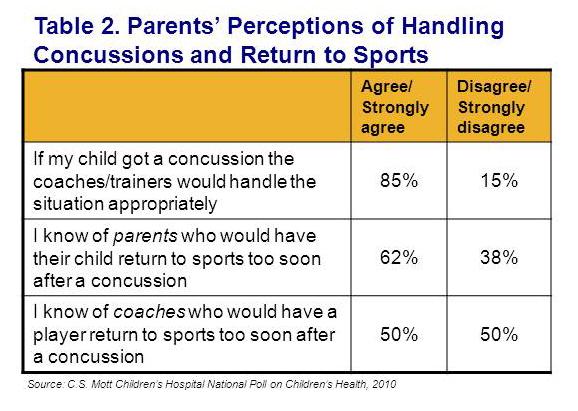 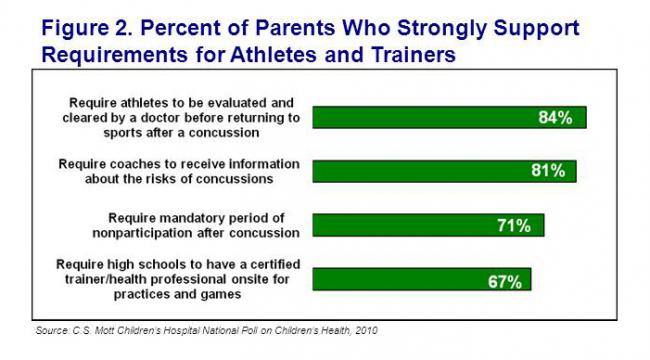 This report presents findings from a nationally representative household survey conducted exclusively by Knowledge Networks, Inc, for C.S. Mott Children’s Hospital via a method used in many published studies. The survey was administered in May 1-17, 2010, to a randomly selected group of parents of children aged 12-17 who play sports( n=291) from the Knowledge Networks standing panel that closely resembles the U.S. population. The sample was subsequently weighted to reflect population figures from the Census Bureau. The survey completion rate was 56% among panel members contacted to participate. The margin of sampling error is plus or minus 4 to 8 percentage points for this analysis.