When teen diets give parents indigestion 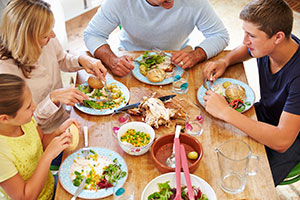 When teen diets give parents indigestion

For some Americans, dieting has shifted from a general approach, such as counting calories or reducing portion size, to a greater interest in special diets that include or prohibit certain types of foods. Although teens are known to experiment with special diets, little is known about how parents respond to this situation. In October 2016, the C.S. Mott Children’s Hospital asked a national sample of parents about their experiences with teens age 13-18 trying gluten-free, vegan, vegetarian, and/or paleo diets.

Seventeen percent of parents report that in the past two years, their teen has tried at least one of these four special diets, with 9% of teens trying a vegetarian diet, 6% gluten-free, 4% vegan, and 2% paleo. According to parents, the most common rationale for teens trying the special diet are health-related reasons (32%) and having a family member on the diet (29%); other reasons are having friends suggest it (17%) and the diet being good for the environment (14%).

Over half of parents (56%) say they did their own research when their teen started a special diet, and 48% report they had their teen begin taking vitamins or supplements. Eleven percent recall that they forbid the teen from going on the special diet. Only 17% say they brought the teen to a health care provider to ask if the diet is healthy.

Parents describe a variety of challenges with having a teen on a special diet, such as finding places to eat out as a family (61%), the time required to make the diet food (55%), the stress of family members eating different foods (54%), conflicts about food at holidays and family gatherings (51%), and the cost of the diet food (50%). 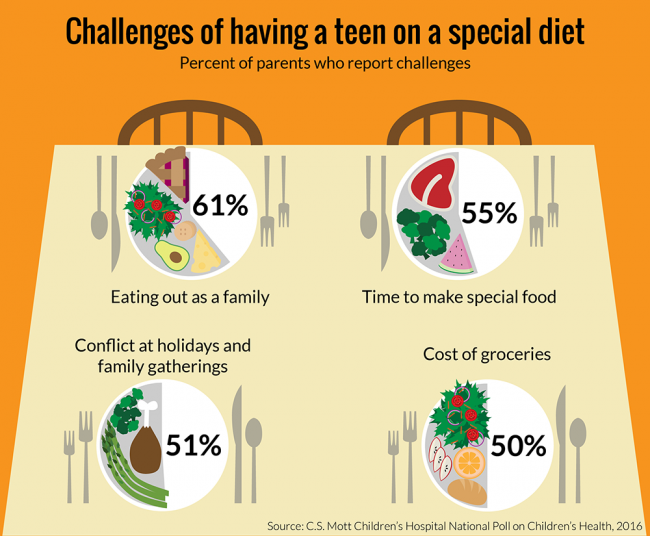 Dieting seems to be common in all age groups, and teens are no exception. But parents may feel particularly anxious when their teen wants to try a diet that requires a substantial change in foods eaten by their teens, and thus could have an impact on the entire family.  This Mott Poll found that teen experimentation with special diets is common, with 1 in 6 parents reporting that their teen has tried a gluten-free, vegan, vegetarian, and/or paleo diet.

Parents described a variety of reasons for their teens’ diet choices. Some diet choices had a specific rationale; for example, parents of teens who tried a gluten-free diet commonly mentioned health-related reasons, while concern for the environment was cited often for teens trying a vegetarian diet. Conversely, some teen diet choices were more discretionary, spurred on by friends or the media. In other cases, a parent or other family member was already trying the diet, and the teen followed along. The rationale for trying a special diet may affect the length and intensity of the teen’s diet experience.

For parents in this Mott Poll, when learning that their teen wanted to try one of the four special diets, the most common response was to do their own research about the diet. Gathering information allows parents to learn more about the types of food emphasized and restricted from the diet, as well as the purported benefits for the diet. However, there are questions about whether parents are able to identify information sources that will yield complete and accurate information about the diet, including any health risks.

The real-world challenges of having a teen on a special diet were evident in these Mott Poll results. There is both a financial cost and an opportunity cost to the daily burden of purchasing and preparing separate food for one member of the family, which can create substantial stress for the parent who bears the burden of those tasks. Other challenges are more occasional, such as finding a restaurant that will accommodate all family members’ food choices when a teen is on a special diet, or determining a plan for a teen who refuses to eat traditional dishes served at family gatherings. Finding compromise solutions – such as having the teen prepare his own meals on certain days, or agreeing to deviate from the diet at holidays – can reduce stress for all family members.

Nearly half of parents suggested that their teen take vitamins or supplements while on a special diet. This is another area where accurate information sources are essential—to avoid undernutrition by choosing products that contain ingredients to address known deficiencies associated with a special diet, and also to avoid over-supplementation of a particular vitamin or nutrient. The question of supplementation is not unique to these four special diets; with a plethora of other weight-loss or diet strategies available, it’s likely that an even larger number of parents are talking with their teens about vitamins and supplements.

The presence of health care professionals was lacking in parents’ response to their teen trying a special diet. This may represent a belief that most providers do not have substantial knowledge on this topic, or difficulty in finding a nutritionist, dietician, or other professional with specific expertise in nutrition. This also could represent the belief that trying a special diet is not an important enough topic to require a specific visit to a health care provider. Still, there may be situations in which failure to recognize and monitor possible health risks of a special diet, or the selection of an ineffective or inappropriate vitamin or supplement, could result in adverse health effects. If parents or teens have any doubts about a special diet, they should consult a health professional.

This report presents findings from a nationally representative household survey conducted exclusively by GfK Custom Research, LLC (GfK), for C.S. Mott Children’s Hospital via a method used in many published studies.  The survey was administered in October 2016 to a randomly selected, stratified group of parents age 18 and older (n=2,036). Adults were selected from GfK’s web-enabled KnowledgePanel® that closely resembles the U.S. population. The sample was subsequently weighted to reflect population figures from the Census Bureau. The survey completion rate was 60% among panel members contacted to participate. This report is based on responses from 910 parents who had at least one child age 13-18. The margin of error is ± 1 to 9 percentage points.