When does sharenting cross the line? Children’s privacy in the age of social media

Sharing photos of babies and children on social media – often called “sharenting” – is a common practice among parents who are used to sharing details about their lives online. But concerns have been raised about when sharenting crosses the line and jeopardizes children’s rights to privacy: for example, in cases of naked baby photos, potty-training toddlers, and embarrassing stories that chronicle childhood development in a public forum.

In the first of what may be many similar cases, an 18-year-old in Austria has sued her parents claiming they violated her privacy by posting embarrassing childhood photos of her on Facebook. The young woman claims her parents posted images and stories about her when she was unable to speak for herself and then her parents refused to remove the photos when she became aware of them and asked.

In 2015, the National Poll on Children’s Health asked parents of young children age 0-4 about their experiences with parenting and social media. Over half of moms and one-third of dads said they discuss parenting on social media. Many parents pointed to the benefits of using social media as a parent and 72% said it helps them feel they are not alone. But three-quarters of parents said they had witnessed another parent over-sharenting about their kids online. Read the report – Parents on social media: Likes and dislikes of sharenting. 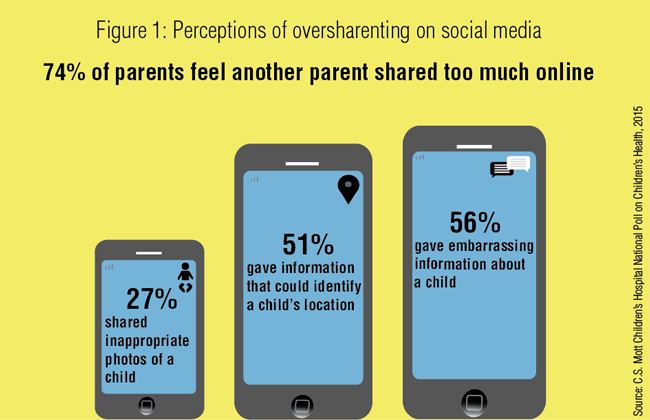 What do you think?
When does sharing photos or stories of kids on social media cross the line? Have you witnessed over-sharenting? Tell us about it on Twitter!