As cell phone use has become more common among children, parents have expressed growing concerns about the content and quantity of material transmitted via the devices. One major concern is ‘sexting,’ in which sexually explicit material is shared via text messages, photos, or videos transmitted between cell phones.

In a recent poll, the CS Mott Children’s Hospital National Poll on Children’s Health asked parents of teens and pre-teens about their children’s use of cell phones and the way parents limit children’s cell phone use.

Cell phone use is common among US children: parents in this poll reported that 27% of preteens age 9-12 and 75% of teens age 13-17 have their own cell phones.

Among children using cell phones, parents report that 87% are texting, and 23% access the Internet through their phones. 41% of parents are either “very” concerned or “somewhat” concerned with the amount of time their children spend text messaging.

A strategy used by 55% of parents to guard against inappropriate cell phone activity is limiting the time that cell phones can be used. Time limits are used substantially more often by parents of preteens than by parents of teens (Figure 1).

A less common strategy, used by 33% of parents, involves blocking the transmission of images on children’s cell phones. Image blocking is also used more often by parents of preteens than by parents of teens (Figure 1). 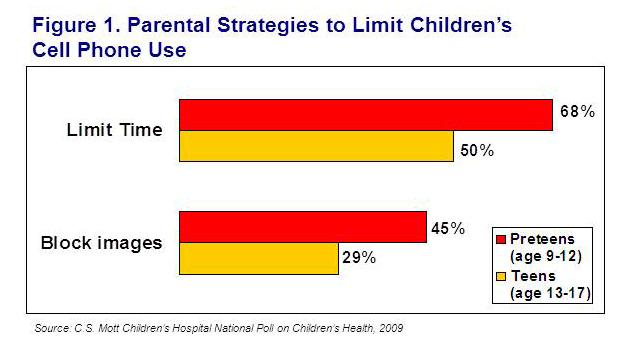 In many ways, cell phones can give parents and kids a sense of security, providing a mechanism for frequent check-ins and a way to call for help in true emergency. But that sense of security may be offset by increasing reports of “sexting” and the serious consequences that can result from ill-advised sharing of sexual content, either in images or text messages.

Findings from this Poll indicate that, while many parents have placed limits related to time spent using cell phones, far fewer parents have instituted a mechanism for blocking images. Perhaps parents fail to appreciate the potential risks of sexting, or they are unaware of how to block images. For parents not already doing so, most national cell phone companies will block image content for a monthly fee (usually $5-$10). As parents and relatives consider purchasing  cell phones as holiday gifts for kids, it may be wise to consider adding image blocking safeguards to calling plans. In addition, parents should establish rules and expectations with their teens and preteens, in order to guard against sexting.

This report presents findings from a nationally representative household survey conducted exclusively by Knowledge Networks, Inc, for C.S. Mott Children’s Hospital via a method used in many published studies. The survey was administered in May 2009 to a randomly selected, stratified group of parents aged 18 and older (n=1,471) with children from the Knowledge Networks standing panel that closely resembles the U.S. population. The sample was subsequently weighted to reflect population figures from the Census Bureau. The survey completion rate was 56% among parent panel members contacted to participate. The margin of sampling error is plus or minus 3 to 6 percentage points, depending on the question. For subgroups, the margin of error is higher.