Bicycle helmet laws for kids effective but not yet the norm 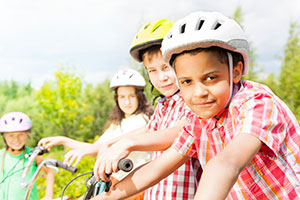 Bicycle helmet laws for kids effective but not yet the norm

Every 3 days in the United States, a child is killed while riding a bicycle. In 2006, 95% of all bicyclists killed were not wearing helmets. Every day, 100 children are treated in emergency rooms for bicycle-related head injuries. Wearing a helmet reduces the risk of brain injury by about 90%.

In this poll, 78% of parents report their children age 4-17 ride bicycles. Of these children,

Why Not Wear a Helmet?

Among parents who report that their children never
wear a helmet;

Overall, there is very strong support for helmet laws. Among all adults in the US, 86% favor bicycle helmet laws for children.

Support for helmet laws differs substantially, however, by whether adults report the presence of laws where they live. Adults who report that there is a helmet law for children in their state or locality show the greatest support for such laws (Figure 3). 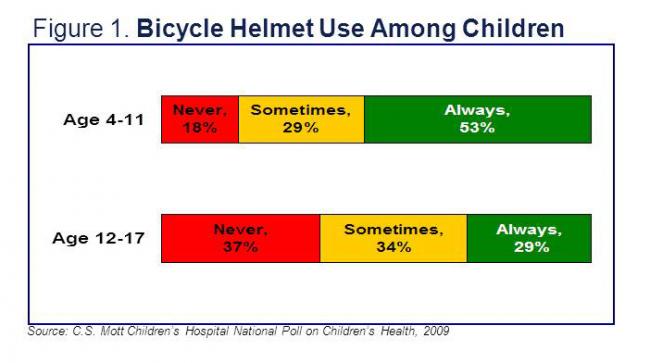 Bicycle helmets save lives and reduce the severity of head injuries related to bicycle accidents. Based on findings from this poll, rates of children’s helmet use are substantially higher when parents know that helmet laws are present than when there are no laws present.

We expect that broader implementation of state laws for helmet use would substantially reduce the number of deaths and serious injuries from bicycle accidents in the US—likely protecting hundreds to thousands of children per year. A substantial majority of respondents to this poll say that they support bicycle helmet laws. Several states currently have pending legislation on bicycle helmet laws and as other states consider such laws, the time may be right for advocates of helmet laws to move this agenda forward.

However, it is also evident from this poll that simply passing new laws may not be sufficient to change behavior. Because cost appears to be an issue for some families, it may be necessary to implement programs to provide free bicycle helmets to lower-income children. Other strategies should target teenage riders, who often do not wear helmets. 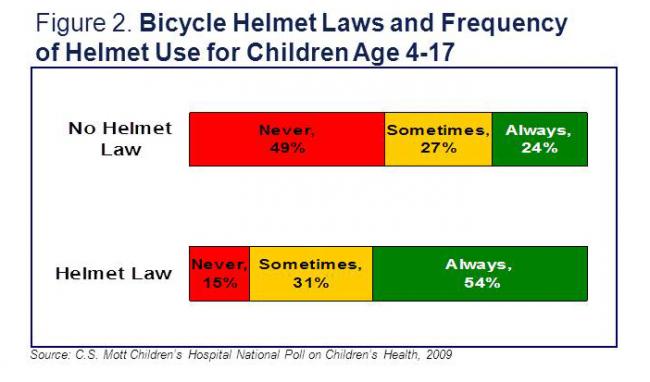 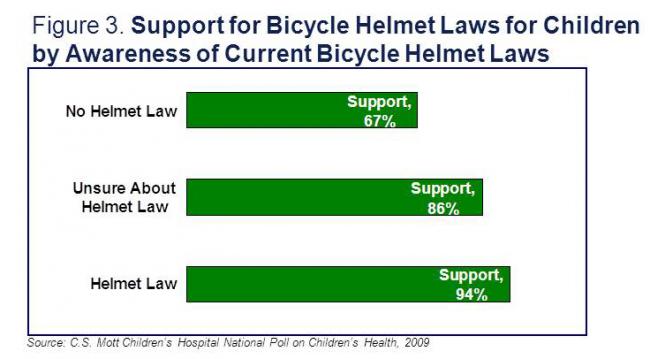 This report presents findings from a nationally representative household survey conducted exclusively by Knowledge Networks, Inc, for C.S. Mott Children’s Hospital via a method used in many published studies. The survey was administered in January 2009 to a randomly selected, stratified group of adults aged 18 and older (n=2,125) with and without children from the Knowledge Networks standing panel that closely resembles the U.S. population. The sample was subsequently weighted to reflect population figures from the Census Bureau. The survey completion rate was 64% among panel members contacted to participate. The margin of sampling error for this sample is plus or minus 1 to 9 percentage points. For results based on subgroups, the margin of error is higher. 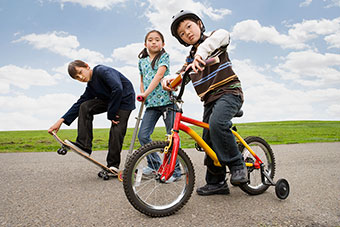