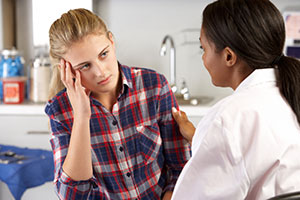 One-third of parents have talked with their children’s primary care doctor about a mental health concern, and the majority of these parents (22% overall) have discussed such concerns within the past year.

Use of Specialty Mental Health Services

One out of five parents indicate that one or more of their children age 5-17 years have been diagnosed with a mental health condition. Mental health diagnoses included attention deficit hyperactivity disorder (ADHD/ADD), behavioral problems, autism, depression, alcohol and drug use, bipolar disorder, and eating disorders. The three most common mental health diagnoses for children age 5-17 years were ADHD/ADD, behavioral problems and depression.

For those parents who say there has been a time when they could not get the mental health services they wanted for their children, nearly one-half said the reasons were that it was difficult to find a provider or that it costs too much, and about one-third said they could not get an appointment in a timely fashion or did not know where to go for specialty mental health services (Figure 3).

Insurance coverage was also a concern for some parents. Overall, only 45% of parents report having full coverage for mental health services, 20% have limited coverage, 8% do not have any coverage and 27% of parents were unsure about mental health coverage. 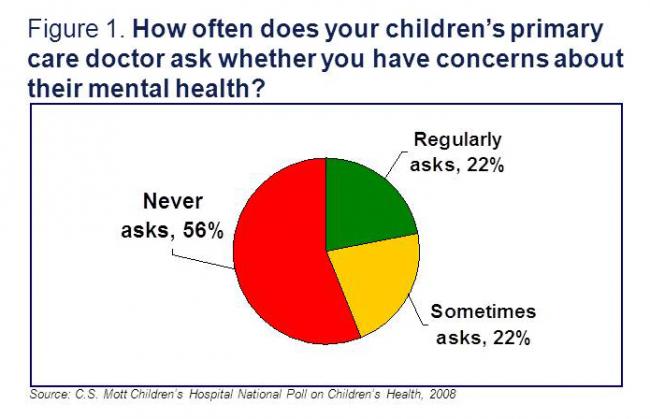 With such a high prevalence of mental health concerns, it is concerning that about one-half of families report that their children’s primary care physicians do not ask about mental health issues during office visits. It appears that primary health care providers may be missing opportunities to identify children and adolescents with mental health problems and to help parents understand treatment options.

Not surprisingly, a substantial proportion of parents of children with mental health concerns in this poll reported that they have had difficulty accessing specialty mental health care for their children. The shortage of specialty providers is a known problem in the United States, but parents also reported trouble with the costs of care and insurance coverage. Such challenges underscore the importance of primary care in addressing mental health issues for youth. 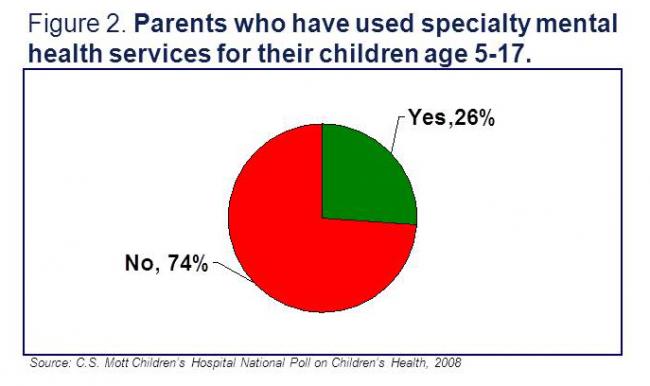 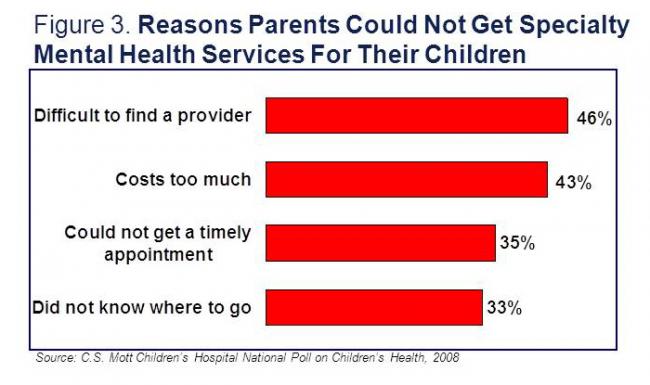 This report presents findings from a nationally representative household survey conducted exclusively by Knowledge Networks, Inc, for C.S. Mott Children’s Hospital via a method used in many published studies. The survey was administered from August 1-31 to a randomly selected, stratified group of adults aged 18 and older (n=2,245) with and without children from the Knowledge Networks standing panel that closely resembles the U.S. population. For this analysis, a subset of parents with children age 5-17 years was used (n=1,473). The sample was subsequently weighted to reflect population figures from the Census Bureau. The survey completion rate was 62% among panel members contacted to participate. The margin of sampling error is plus or minus 2 to 11 percentage points, depending on the question.