Too much of a good thing? Kids in low-income families drink more juice than recommended 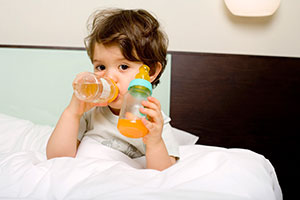 Too much of a good thing? Kids in low-income families drink more juice than recommended

Early tooth decay and childhood obesity are two major problems confronting children in the United States. While soda and other sugar-sweetened drinks have been labeled as unhealthy beverages for young children, the question of fruit juice is less clear. For more than ten years, the American Academy of Pediatrics has recommended limiting fruit juice to one serving per day for children 1-6 years of age.

In September 2011, National Poll on Children’s Health asked parents of children from 1-5 years old about their children’s juice consumption.

Juice – How Often and How Much?

Overall, 52% of parents report that their young children drinks juice most days or every day, while 48% report their child drinks juice rarely or a few times a week.

Advice about Juice – From Doctors 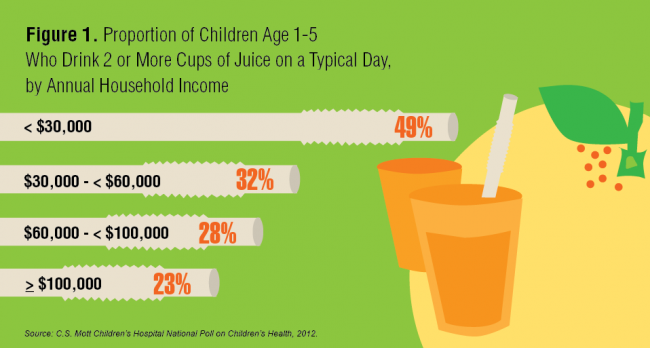 The question of whether to give juice to young children can be a difficult one for parents.  On one hand, juice may be seen as a healthy beverage—one that counts toward the recommended servings of fruit and vegetables. On the other hand, many types of juice include added sugars, raising concerns about whether early juice drinking can put young children on a course toward early dental problems and childhood obesity.

As with most things, the key is moderation. Findings from this National Poll indicate that most parents report their young children drink only a limited amount of fruit juice.  However, about one-third of parents are giving their young children more juice than the 1 serving per day recommended by the American Academy of Pediatrics.

Furthermore, children who drink 2 or more cups of juice on a typical day are also drinking juice most or every day – indicating that excessive juice consumption is occurring in a certain segment of the child population. In this Poll, children living in lower-income households are especially likely to be frequent and high-volume juice drinkers.

To address this issue, healthcare providers may need to be more careful in how they discuss juice with parents of young children.  Although doctors of kids in lower-income families may be trying to be helpful in recommending juice as way to ensure children have recommended servings of fruit, they must ensure that parents understand that juice consumption should be limited to 1 serving a day.

This report presents findings from a nationally representative household survey conducted exclusively by Knowledge Networks, Inc. (KN), for C.S. Mott Children’s Hospital via a method used in many published studies. The survey was administered in September 2011 to a randomly selected, stratified group of parents age 18 and older (n=606) with a child age 1-5 from the KN standing panel that closely resembles the U.S. population. The sample was subsequently weighted to reflect population figures from the Census Bureau. The survey completion rate was 58% among parent panel members contacted to participate. The margin of error is ± 5 to 11 percentage points.