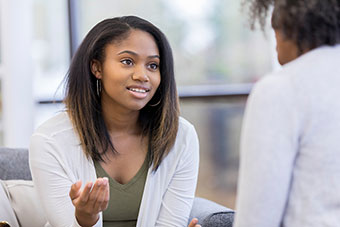 An essential task of parenting involves helping teens learn to manage their own health and well-being, so they are prepared for adulthood. The C.S. Mott Children’s Hospital National Poll on Children’s Health asked a national sample of parents of teens 14-18 years old about their efforts to support their teens’ independence.

Nearly all parents (97%) report using at least one strategy to help their teen become more independent, like allowing teens to make more choices (86%), pushing them to handle certain things themselves (74%), and no longer doing things for them (65%).

Most parents believe they are doing enough to prepare their teen for adulthood (24% strongly agree, 63% agree); those who strongly agree rate their teens as better able to handle school, financial, personal well-being and healthcare tasks on their own. Parents are nearly universal in their belief that it is important for teens to have chances to make mistakes (43% strongly agree, 52% agree), but also feel that parents should prevent teens from mistakes that are too serious (31% strongly agree, 55% agree).

Sixty percent of parents cite characteristics of their teen as the main barrier to becoming more independent, such as not being mature enough (24%), not having time (22%), or not knowing enough (14%) to take on more responsibility. One quarter of parents cite themselves as the main impediment to their teen becoming more independent, saying it’s less time and hassle to do things themselves rather than involve their teen (19%), or that they just don’t think about how to give teens more responsibility (7%).

Parent ratings of their teens’ ability to handle things on their own differ substantially across school, financial, personal well-being, and healthcare tasks – even for older teens (17-18 years) on the cusp of adulthood. Most parents say their older teens handle school matters on their own, such as keeping track of their assignments (83%) and planning time for studying (83%). Fewer parents say their older teens handle some money matters on their own, such as earning money for extras (63%) or saving for the future (46%). In terms of managing their own well-being, parents rate older teens as more independent in getting enough exercise (74%) and sleep (65%) than dealing with stress (48%) or eating healthy foods (41%). Parents reports that older teens have limited ability to handle healthcare tasks by themselves, from taking care of minor injuries (49%) to figuring out the correct dose of medicine (25%) and making doctor’s appointments (8%). 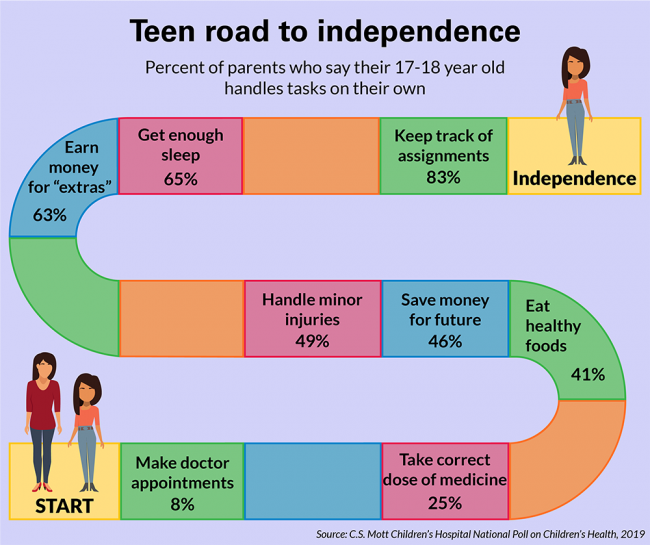 As children become teenagers, the role of parents shifts to helping them gain the knowledge and experience they will need for being independent adults. This process of transitioning from childhood to adulthood encompasses all aspects of life, from preparing for work and financial responsibility, to taking care of one’s health and well-being.

Results of this Mott Poll demonstrate that parents may be overestimating their efforts to support teen independence. Although 87% of parents agreed that they are doing enough to prepare their teen for adulthood, parents gave relatively low ratings of their teen’s ability to handle basic tasks – even for teens 17-18 years, who are at the cusp of adulthood.

Parents gave the lowest ratings of teen independence for tasks related to healthcare. When it comes to their teen’s health, parents may feel responsible for ensuring that appropriate care is received and medical advice followed. However, this Mott Poll did not ask about life-or-death healthcare matters; rather, parents were asked if teens could independently handle very basic tasks, such as taking care of minor injuries, figuring out the correct dose of a medication, or calling to make a doctor’s appointment.

An additional challenge is that opportunities for teens to practice handling healthcare matters occur infrequently; moreover, when teens are not feeling well due to illness or injury, parents may be hesitant to push their teen to handle certain tasks. While this is understandable, parental over-involvement impedes teens from gaining experience and confidence. A better approach for parents may be to position themselves as a back-up resource, to be consulted only if the teen cannot handle the matter independently.

It is clear that parents recognize the tension in helping teens move toward independence. Universally, parents agree that it’s important for teens to have chances to make mistakes; often, valuable learning experiences result from teens facing the consequences of a poor decision. At the same time, parents believe that they should prevent teens from making mistakes that are too serious – those that may have significant and/or long-term consequences. It is unclear whether parents weigh which situations may offer their teens a useful learning experience vs those that require close parental oversight to prevent a serious and lasting negative consequence.

Some parents cited their teen’s lack of maturity or knowledge as reasons the teen was not becoming more independent. This belief is not a justification for parents to delay efforts to promote their teen’s independence. Instead, parents can establish specific milestones, and create opportunities to mentor their teens in gaining experience and confidence while reaching those goals.

Finally, some respondents acknowledged that parents themselves can be the biggest barrier to teens moving toward independence. In many respects, parents are correct that it is quicker and less hassle to handle tasks themselves; however, this view is short-sighted, and robs teens of a critical learning period where they can accumulate knowledge and skills for the future, while still at home with parents to provide guidance and support as needed. Parents of teens should look for regular opportunities to involve teens as much as possible in managing their own health, well-being and money matters, even if it takes a little more time.

This report presents findings from a nationally representative household survey conducted exclusively by Ipsos Public Affairs, LLC (Ipsos), for C.S. Mott Children’s Hospital. The survey was administered in February 2019 to a randomly selected, stratified group of parents age 18 and older (n=2,032). Adults were selected from Ipsos’s web-enabled KnowledgePanel® that closely resembles the U.S. population. The sample was subsequently weighted to reflect population figures from the Census Bureau. The survey completion rate was 60% among panel members contacted to participate. This report is based on responses from 877 parents who had at least one child 14-18 years. The margin of error is ±1 to 6 percentage points. 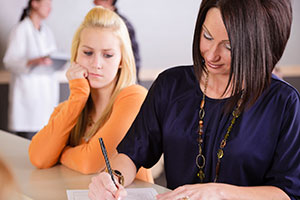