Parent views on teens, religion and the holidays 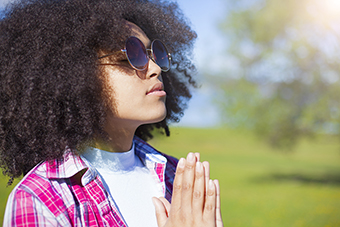 Parent views on teens, religion and the holidays

Many families center holiday celebrations and activities around religious practices. Some parents may notice that their teens are less interested in religious activities than when they were younger children. The C.S. Mott Children's Hospital National Poll on Children's Health asked a national sample of parents of teens 13-18 about their participation in religious services, in general and at the holidays.

Most parents agree that having a relationship with God or a higher power has a positive impact on a teen's overall health and well-being (86%) and helps teens feel a sense of safety (82%). Three-quarters of parents (77%) think participating in religious services helps teens connect with their family history and traditions, yet 90% believe teens can believe in God or a higher power without being involved in organized religion. 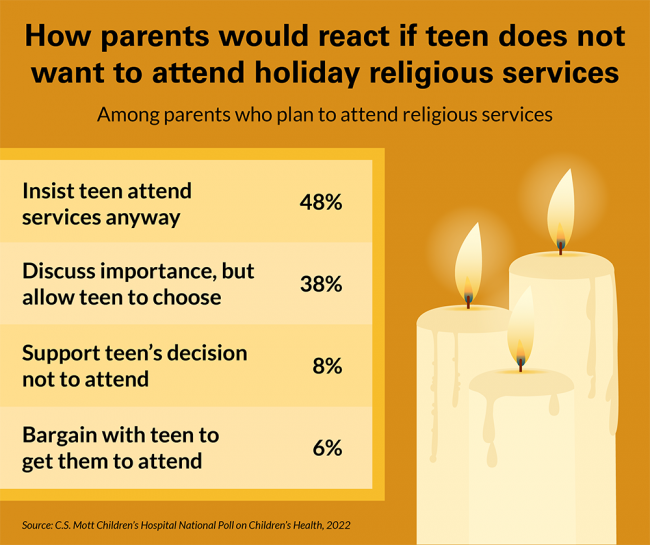 Adolescence is a time when youth gain more independence in their beliefs and lifestyle choices. Often this includes whether to embrace their family’s faith traditions. In this Mott Poll, three quarters of parents believe that attendance at religious services helps teens connect with their family history and traditions. However, when teens indicate they do not want to attend religious services or participate in religious activities, parents may feel like it is a rejection of their cherished traditions.

Among parents who plan to attend religious services over the holiday season, half would insist their teen go along even if they did not want to. The link between family traditions and religion may contribute to parents’ desire for their teens to participate. Focusing on the spirit of the season and allowing teens some flexibility with how they engage with family traditions and religious services may decrease conflict over the holidays.

Most parents appreciated the positive impact of spirituality for teens, agreeing that a relationship with God or a higher power helps teens feel a sense of safety and security, and has a positive impact on their overall health and wellbeing. These parental beliefs are in line with other research suggesting that participation in spiritual or religious practices during adolescence is linked to improved quality of life and health in adulthood.

The vast majority of parents in this Mott Poll believed teens can have a relationship with God or a higher power without being involved in organized religion, while over half were comfortable with children and teens having a say in whether to attend religious services. Still, 44% of parents felt that the choice of attending services should not be given until age 18 or older. This presents a dilemma because the positive effects of participation in religion may be diminished when adherence is achieved by force or coercion. Thus, parents who would like their children to share their religious beliefs should try to find a balance between conveying their values and convictions versus pressuring teens to conform.

A good place to start might be to understand why the teen has different views about attending religious services. Often youth have questions about religion and spirituality. Allowing youth the space to question and admitting that adults do not always have the answers may help teens to find an authentic spiritual relationship that is best for them. Encouraging them to read widely, meditate on these issues, and even to spend time in nature could be helpful. By listening to their teen’s perspectives, parents may be able to find areas of agreement to build on.

Parents could consider giving teens a choice about aspects of their faith tradition that are most important to the family. For example, teens could be allowed to skip weekly services, but be required to adhere to other tenets of the family religion. In addition, families could explore different ways to cultivate and express spirituality. Many faith traditions value community service, social justice initiatives, and conservation efforts. The holidays offer ample opportunities for families to do these things together, such as volunteering at a nursing home, serving food at a homeless shelter, or working in a community garden. These could be part of a spiritual experience instead of or in addition to attendance at religious services.

This report presents findings from a nationally representative household survey conducted exclusively by Ipsos Public Affairs, LLC (Ipsos) for C.S. Mott Children’s Hospital. The survey was administered in August-September 2022 to a randomly selected, stratified group of adults who were parents of at least one child age 0-18 years living in their household (n=2,023). Adults were selected from Ipsos’s web-enabled KnowledgePanel® that closely resembles the U.S. population. The sample was subsequently weighted to reflect population figures from the Census Bureau. The survey completion rate was 61% among panel members contacted to participate. This report is based on responses from 1,090 parents with at least one child age 13-18. The margin of error for results presented in this report is ±1 to 6 percentage points.