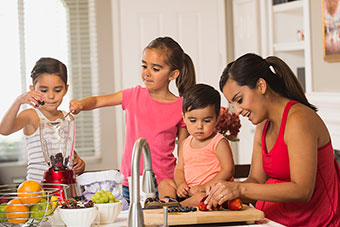 Food-borne illnesses are usually caused from a bacteria or virus in food, often through contamination from a person or from having food at temperatures that support the growth of germs. Although it is impossible to completely protect their children against food-borne illness, many families use a variety of strategies to try to reduce the risk of them getting sick from eating spoiled or contaminated food. This C.S. Mott Children’s Hospital National Poll on Children’s Health asked a national sample of parents about their experiences and concerns with food safety.

About 1 in 10 parents (11%) reported their child had ever gotten sick from eating spoiled or contaminated food, while another 18% were unsure if their child’s symptoms were caused by food poisoning. Among parents of children who had gotten sick from spoiled or contaminated food, most (68%) thought the origin of the sickness was eating in a restaurant. Less common were parents who believed their child got sick from food eaten at their own home (31%), school (21%), a friend’s house (14%), or at a covered dish/potluck (11%).

Parents’ efforts for preventing their children from getting food poisoning did not match their prior experience. Although restaurants were the most commonly reported origin for food poisoning, only 25% of parents reported they check health inspection ratings before eating out. About the same number of parents (27%) said they avoid dishes containing egg or mayonnaise when attending potluck dinners with their children – even though far fewer parents reported potluck dinners as the origin of their child’s food-related sickness.

Parents put much more effort into food safety in their own home. Most parents said they wash their hands before preparing a meal (87%), wash fruits and vegetables before serving (80%), and check the expiration dates on refrigerated food (84%). If a refrigerated product was more than two days past its expiration date, 57% of parents said they would smell or taste it themselves to see if it was OK to eat or if it was spoiled, while 43% said they would automatically throw the food away. If parents heard that a food product in their home had been recalled, almost all would not feed it to their children with 58% reporting they would throw it away and 40% returning it for a refund or replacement. 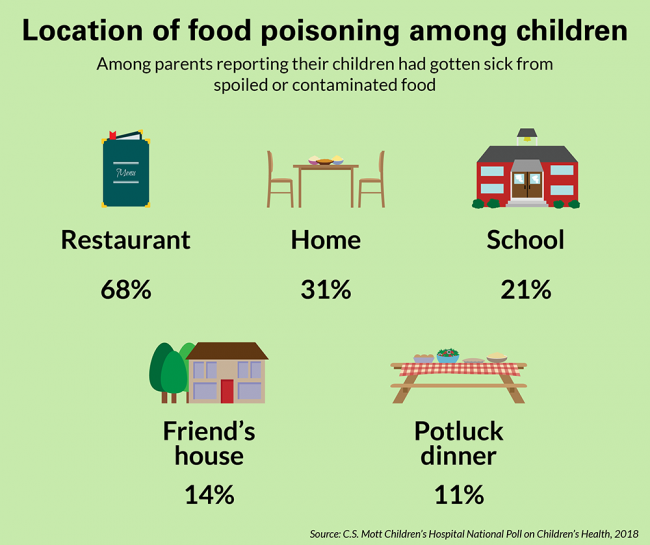 Food poisoning can occur when germs, either certain bacteria or viruses, contaminate food or drinks. This can happen at many different places in the process as food moves from harvesting to packaging to preparation to serving. Once contaminated food enters the body, some germs release toxins that can cause diarrhea, vomiting and sometimes fever or muscle aches. Depending on the germ, symptoms can last from an hour to several days. The most important treatment for food poisoning is to make sure a child drinks plenty of fluids to prevent dehydration. Sometimes, parents find frozen liquids, such as popsicles or ice chips, easier for children to keep down. Fortunately, most cases of food poisoning last only a day or two and do not require medical care. However, if there are signs of dehydration or if the illness lasts more than a few days, parents may want to check with their primary care provider.

Understanding how germs get into food can help parents know how to best protect their children. Before food ever gets to a supermarket or restaurant, safe handling is important to prevent infection. Fruits or vegetables can be affected by contaminated water used during irrigation or by infections passed on by workers who harvest the crops. Parents should be sure always to wash fruits and vegetables before cooking or serving as many germs can be removed in this way. Most parents in this poll (80%) reported always doing so. However, recent outbreaks of food poisoning from the bacteria E. Coli or Listeria were traced to seemingly “safe” foods like lettuce, apples and cantaloupes. Although the illness is usually mild, there were multiple hospitalizations and even some deaths as a result of the infection.

Storage of foods at the wrong temperatures can result in harmful bacterial growth in food that results in food poisoning. Sometimes refrigerators are not kept cool enough to inhibit bacterial growth, or egg and dairy containing foods may remain too long at room temperature. Alternatively, cooked foods may not be kept hot enough on a buffet line to keep them safe. A common feature of restaurant inspections is checking to see that food is refrigerated appropriately to keep it safe. In this Mott Poll, although the most common place parents thought their child had gotten sick was eating at a restaurant, only 25% reported checking the safety rating of a restaurant prior to eating there. These safety ratings include inspections of proper temperature storage of food as well as cleanliness of preparation areas. Potluck/covered dish dinners are frequently blamed for food poisoning due to food, especially egg-based items like mayonnaise, being left out too long at room temperature. However, few parents reported their child got food poisoning at this type of event.

Hand washing is an important food safety strategy when preparing and serving meals. As many infections are spread in a fecal-oral pattern, it is essential for everyone who prepares food, at home or in a restaurant, to wash hands thoroughly after using the restroom. Almost all parents (87%) in the poll reported they always washed their hands before preparing food. Some food handlers also wear gloves as an extra precaution. One of the more common germs passed on unwashed hands is the virus, Hepatitis A. Fortunately, a vaccine to prevent hepatitis A exists and is currently recommended for all children at one year of age.

Another important safety measure when preparing food is to make sure that cutting boards and utensils are kept clean and washed before use. Food residue left on cutting surfaces is an easy place for bacteria to grow that can then be transferred to the new foods being prepared. For meat or poultry, food can be contaminated with waste during processing or shipping. This is why it is important to make sure to thoroughly cook chicken or turkey and not use the same utensils to handle uncooked and cooked meat.

Around one third of parents reported that their child got sick after eating a meal at home. Greater attention to making sure food preparation areas are as clean as possible, as well as washing fruits and vegetables can help to prevent food-borne illnesses in the home.

This report presents findings from a nationally representative household survey conducted exclusively by GfK Custom Research, LLC (GfK), for C.S. Mott Children’s Hospital. The survey was administered in November 2017 to a randomly selected, stratified group of parents age 18 and older (n=2,005). Adults were selected from GfK’s web-enabled KnowledgePanel® that closely resembles the U.S. population. The sample was subsequently weighted to reflect population figures from the Census Bureau. The survey completion rate was 60% among panel members contacted to participate. The margin of error is ±2 to 7 percentage points. 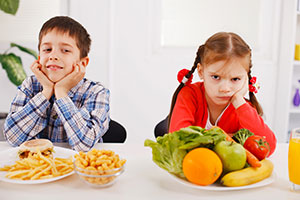 Healthy eating for children: Parents not following the recipe