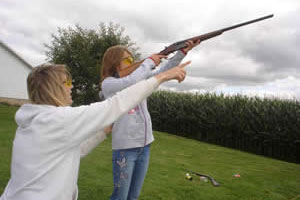 As many as one-half of American households have a gun. Each day, nearly 30 U.S. children are injured or killed by firearms. Most firearm injuries—whether intentional or unintentional—result from guns owned by the child’s family or friends. Thus, many children are likely to be in a situation where guns are present, and would potentially be safer if they knew basic principles of gun safety.

In August 2010, the C.S. Mott Children’s Hospital National Poll on Children’s Health asked parents about gun ownership and gun safety for their children.

One-third of all parents with children age 5-17 report having a gun in the household.

Surprisingly, 18% of gun-owning parents say they have never talked with their children about gun safety.

When asked, how worried are you that your child could get hurt with a gun when at a friend’s home?, 19% of parents say “very worried.” Among gun owning parents, only 10% are very worried, compared with 24% of parents who do not own a gun. 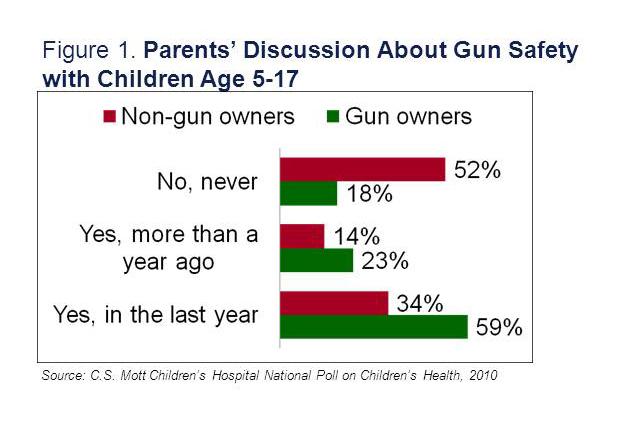 With firearms in about one-third of the approximately 35 million U.S. households with children under 18, discussion of gun safety is something all parents need to consider. Parents in non-gun-owning households simply cannot assume that their children will never encounter a situation involving firearms.

In discussing gun safety, parents should look for age-appropriate wording to emphasize:

It’s important to have conversations about gun safety, so that children know what to do when they are around firearms. Results of this poll indicate that parents feel more confident and less worried about their children when they have such talks with their kids. Those talks may help keep kids safer around guns as well, whether they live in a household with a gun or not.

This report presents findings from a nationally representative household survey conducted exclusively by Knowledge Networks, Inc, for C.S. Mott Children’s Hospital via a method used in many published studies. The survey was administered on August 13 - September 7, 2010 to a randomly selected, stratified group of parents aged 18 and older (n=1,621) from the Knowledge Networks standing panel that closely resembles the U.S. population. The sample was subsequently weighted to reflect population figures from the Census Bureau. The survey completion rate was 57% among parent panel members contacted to participate. The margin of sampling error is plus or minus 3 to 6 percentage points, depending on the question.