Majority of U.S. parents not in favor of state HPV vaccine mandates 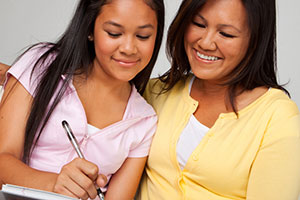 Majority of U.S. parents not in favor of state HPV vaccine mandates

In 2006, vaccination against human papillomavirus (HPV) was recommended by the Centers for Disease Control and Prevention (CDC) for all girls aged 11-12 years old. The currently available vaccine prevents infections by 4 different types of HPV, transmitted through sexual contact, that cause cervical cancer and genital warts.

States’ legislative action regarding HPV vaccine has generated considerable attention. Virginia has enacted a law requiring HPV vaccination for entry into 9th grade, and 24 other states (including D.C.) have introduced bills to mandate that girls receive the 3-dose HPV vaccine series.

Advocates say that mandates that require children receive certain vaccines before they can enter daycare or school are known to boost immunization rates and protect children’s health. Opponents say that vaccination mandates take health decisions out of the hands of parents. The debate is amplified for the HPV vaccine, because the vaccine prevents a major disease—cancer— but HPV infections would not be expected to affect school attendance like other infections for which vaccine mandates exist. Critics also cite concern about the HPV vaccine’s cost and safety, and others express moral objections to a vaccine mandate for a sexually transmitted infection.

The C.S. Mott Children’s Hospital National Poll on Children’s Health asked parents if they would support a state law that requires girls to receive HPV vaccine before entering 9th grade. As a comparison, parents were also asked if they would support a state law requiring boys and girls to get a new booster vaccine that protects against tetanus, diphtheria and whooping cough (Tdap), also before entering 9th grade.

Attitudes About Vaccine Safety and Mandates

The National Poll on Children’s Health also asked parents if they felt, in general, that newly available vaccines were safe for their children.

There was a strong relationship between parents’ perception of the safety of new vaccines and their views on vaccine mandates. Most parents (75%) who disagreed that new vaccines are generally safe opposed HPV school mandates, and 26% of parents who were neutral on vaccine safety opposed HPV mandates. Among parents who agreed that vaccines are generally safe, only 16% opposed an HPV mandate.

In contrast, among parents who agreed that vaccines are generally safe, 61% supported an HPV mandate.

Overall, there were no significant differences in parent opinions on a state mandate for HPV vaccination for girls when comparing responses from states with an existing mandate or pending legislation (45% in favor of mandates) to states that have not introduced HPV mandate legislation (42% in favor of mandates). In addition, there were no significant differences in opinions between these two groups regarding school mandates for Tdap vaccine. 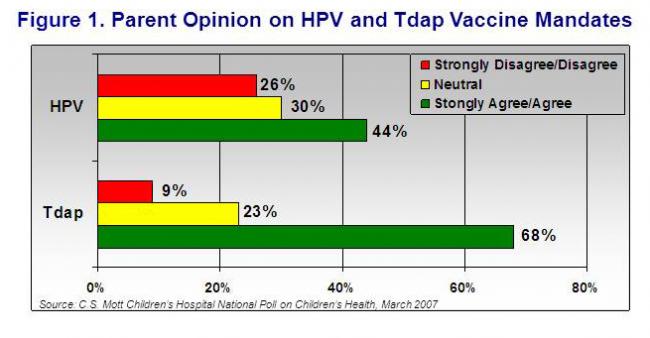 State mandates regarding vaccination upon school entry have long been effective ways to help safeguard children’s health, but they have become increasingly controversial. In the case of HPV vaccine, mandate proponents argue that states should encourage parents to prevent their daughters from getting cervical cancer caused by HPV infection. Mandate opponents say that HPV vaccination should not be required because the infection is not communicated through respiratory contact and therefore does not pose the same danger to health of school communities as other illnesses prevented by mandated vaccines. Of note, the CDC and the American Academy of Pediatrics support universal HPV vaccination for girls but do not support mandates for HPV vaccine.

In this National Poll on Children’s Health, we found that less than one-half of US parents favor an HPV vaccine mandate for school entry. Moreover, one-quarter of parents unequivocally disagree with HPV vaccine mandates. In contrast, more than two-thirds of parents favor a mandate regarding the new Tdap vaccine – although such a mandate has not been considered by states so widely as HPV mandates.

These findings indicate that the American public is able to distinguish between new vaccines, and that legislative action on HPV may be somewhat disconnected from public sentiment. mandate legislation. Ultimately, HPV vaccination efforts may lack the boost given by school entry mandates to other broadly recommended vaccines. 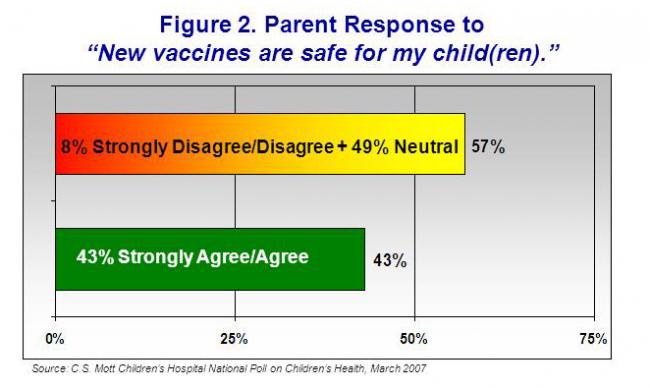 This report presents findings from a nationally representative household survey conducted exclusively by Knowledge Networks, Inc, for C.S. Mott Children’s Hospital. The survey was administered from March 14-26, 2007, to a randomly selected, stratified group of adults aged 18 and older with and without children from the Knowledge Networks standing panel that closely resembles the U.S. population. The sample was subsequently weighted to reflect the U.S. population figures from the Census Bureau. The response rate was 73% among Knowledge Networks panel members contacted to participate. This report reflects responses from a subsample of 1342 parents.