Traveling with toddlers: Health and safety on vacation? 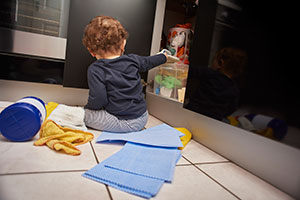 Traveling with toddlers: Health and safety on vacation?

Each year, millions of families with toddlers travel during the holiday season, leaving behind their daily routine and child-proofed home environment—and putting the burden on parents to implement health and safety precautions while on the road.

In October 2016, the C.S. Mott Children’s Hospital National Poll on Children’s Health asked a national sample of parents about their experiences traveling with a toddler.

Parents report using different strategies to keep their toddler from getting sick during recent family travel. Most parents (88%) try to make sure the toddler gets enough sleep, and 81% avoid other people who are sick. Less common strategies include using hand sanitizer on their toddler (61%), disinfecting bathrooms and other surfaces (52%), and giving their toddler vitamin C (23%).

To keep their toddler safe, 85% of parents report putting their toddler in a car seat for every car ride during their recent family travel. However, 15% indicate they did not consistently use a car seat; typically, gaps in car seat use involved taxi and ride-share trips. Most parents say that during recent family travel, they made sure that potential dangers were locked and/or out of reach, including medications (75%), guns/weapons (67%), and cleaning supplies (65%); and most (67%) say they checked the hot water temperature. Forty percent of parents report taking all five of these safety precautions during recent travel with their toddler, while 3% did none of the five safety strategies. 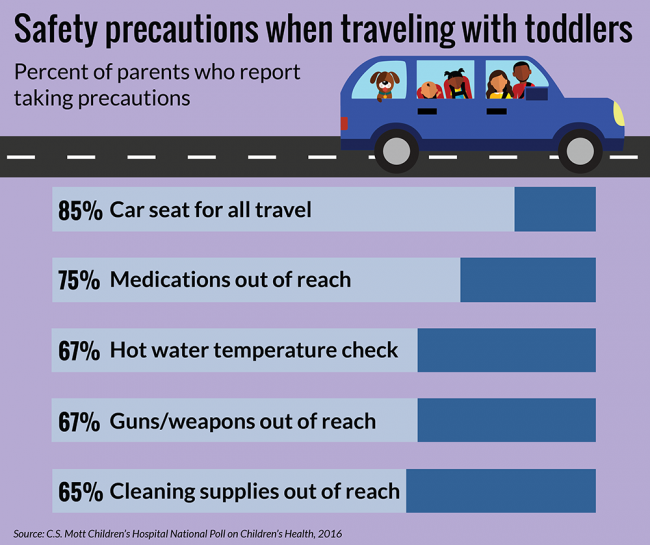 Traveling with a toddler can be hectic for parents: in addition to the usual responsibilities of packing and travel logistics, parents often worry about keeping toddlers entertained and avoiding meltdowns. However, this Mott Poll suggests that many parents are not actively taking precautions to ensure their toddler’s safety while on vacation, thus increasing the risk of injury.

A troubling result from this poll is that 15% of parents did not put their toddler in a car seat for all car rides taken during a recent trip, which places the toddler at significant risk of injury in the event of a crash. The majority of instances where a car seat was not used involved taxi or ride-share services (such as Uber or Lyft). It is likely that in some cases, parents actively chose not to use a car seat, while other times the car seat was unavailable due to lack of planning. Since car crashes are a leading cause of injury and death among toddlers, it is essential that parents plan ahead to ensure that their toddler is in an age-appropriate car seat for every car ride during vacation.

Results of this Mott Poll suggest that many parents may not appreciate the risk of accidental poisoning while on vacation with their toddler. Medication is a common cause of accidental poisoning for toddlers. Many parents are careful to keep their family’s medications stored out of reach while at home, but are less fastidious while on vacation, leaving medications in open suitcases or on hotel tables. Another common cause of poisoning is household cleaners, which are often stored in cabinets low to the ground, right at toddler level.

Planning ahead is important to minimize the risk of poisoning. If staying at the home of friends or relatives, parents may ask in advance of the visit for the hosts to put medications, household cleaners, and other potential dangers in a location out of a toddler’s reach. Parents may want to pack portable safety devices (e.g., cabinet latches, baby gates) to use as barriers to potential dangers, both in home or hotel settings. Most importantly, once they arrive at a destination, it is important for parents to do a thorough review of the home—from the toddler’s perspective—to identify potential safety hazards, including medications, cleaning supplies and other poisonous substances.

Given recent instances of accidental shootings by and of toddlers, specific safety precautions related to guns and weapons are important to consider. Although some parents are uncomfortable bringing up this topic, parents have a legitimate reason to ensure that any and all weapons are stored in a safe manner.

This report presents findings from a nationally representative household survey conducted exclusively by GfK Custom Research, LLC (GfK), for C.S. Mott Children’s Hospital via a method used in many published studies. The survey was administered in October 2016 to a randomly selected, stratified group of parents age 18 and older (n=2,036). Adults were selected from GfK’s web-enabled KnowledgePanel® that closely resembles the U.S. population. The sample was subsequently weighted to reflect population figures from the Census Bureau. The survey completion rate was 60% among panel members contacted to participate. This report is based on responses from 659 parents who had at least one child age 2-5 years. The margin of error is ± 2 to 5 percentage points.