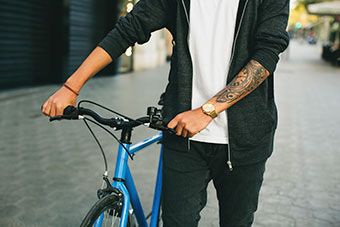 Many parents recall “temporary tattoos” that children got in in packs of gum or cereal boxes, or as carnival prizes at a fair. However, permanent tattoos are becoming increasingly common, including among teens. The C.S. Mott Children’s Hospital National Poll on Children’s Health asked a national sample of parents of teens 13-18 years of age about their views on tattoos.

Parents were asked how they would react if their own teen wanted to get a tattoo at age 16-17 years. The majority of parents (78%) said they would absolutely not consider it. However, 1 in 10 parents thought a tattoo would be okay as a reward (10%) or to mark a special occasion/remembrance (10%) or if the tattoo could be hidden (9%).

One quarter of parents (24%) thought that 16-17 years was the minimum age that a teen should be able to get a tattoo with their parent’s consent, while 75% of parents felt the minimum age should be 18 or older. Parents supported a legal basis for this belief: 82% strongly agreed that state laws should require parental consent for tattoos for children under 18 years.

Two-thirds of parents (63%) agreed with the statement that getting a tattoo is a form of self-expression similar to dying hair or clothing choice. Still, parents expressed worries about the social consequences of teens getting tattoos: 50% of parents were very concerned that employers might judge or stereotype their teen unfavorably if they had a tattoo, while 24% of parents were very concerned that their teen getting a tattoo would reflect badly on the parents themselves. However, the most common parental concern was that their teen might regret the tattoo in the future (68%). 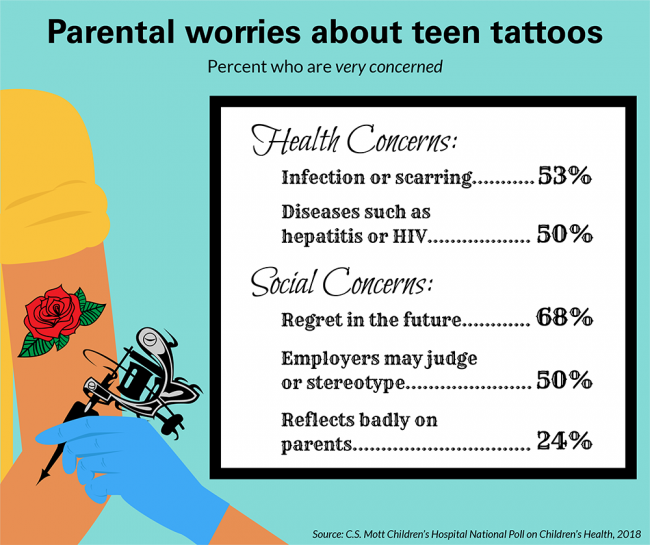 As tattoos become popular across all age groups and segments of society, parents are increasingly faced with decisions about tattoos for their children. In this month’s Mott Poll report, one quarter of parents of high school students said their teen had asked about getting a tattoo.

Parent views about tattoos for teens are multifaceted. Most parents agree that tattoos have become a common form of self-expression, similar to fashion or hair styles. One in ten parents in this poll felt that tattoos could be appropriate for teens to commemorate a noteworthy achievement or occasion. Yet parents also understand that permanence of tattoos may not mesh with the impulsivity of teen decision-making. Thus, there is broad support among parents for laws that ensure parental consent in decisions about tattoos for underage teens. Currently, all states have laws requiring a person to be at least 18 years of age to get a tattoo without parental permission.

The potential for negative health impacts are an aspect that many parents consider. Although there are no specific data about the rate of complications from tattoos, the most common concerns are dirty needles causing skin infection or transmission of diseases such as hepatitis B or C and HIV. Prolonged redness of the tattoo site or other symptoms such as fever or jaundice should alert parents to potentially serious problems.

However, it can be difficult for parents and teens to determine if a tattoo parlor or artist is using appropriate safety and hygiene precautions. While the federal Food and Drug Administration regulates the inks used in tattoos, the actual practice of tattooing is regulated locally by cities, counties and states. There is wide variation in how tattoo artists are trained, licensed, and inspected; some states do not have any regulation related to tattoo parlors or artists. Therefore, there is likely to be substantial variability in cleanliness and hygiene among tattoo parlors. In considering whether and where to get a tattoo, parents and teens should inquire about the process used to sterilize equipment, as well as the training and licensing status. They should also make sure the tattoo artist wears gloves when applying the tattoo and thoroughly cleans the skin prior to beginning a procedure.

Many parents worry about the potential social consequences of teens getting tattoos. One area of concern is the possibility that employers would take an unfavorable view of a teen with a tattoo, and perhaps incorporate that view into hiring decisions. Parents also might worry about future workplace discrimination, as their teen enters adulthood and embarks on a professional career; parents may perceive that a visible tattoo is not acceptable in some occupations or settings.

The most common concern for parents is that their teen might regret the tattoo at some point in the future. Photographs of their own teen years may prompt a level of embarrassment among parents at their own fashion choices, along with a sense of relief that those choices were not permanent. Parents realize that their teens will mature over time and tastes may change. If a teen has a change of heart at some point in the future, the good news is that it is now possible to remove almost all tattoos, but it can be expensive. Improved laser technology allows for the removal of almost all tattoos with the discomfort being no worse than getting the tattoo originally.

This report presents findings from a nationally representative household survey conducted exclusively by GfK Custom Research, LLC (GfK), for C.S. Mott Children’s Hospital. The survey was administered in April 2018 to a randomly selected, stratified group of parents age 18 and older (n=2,074). Adults were selected from GfK’s web-enabled KnowledgePanel® that closely resembles the U.S. population. The sample was subsequently weighted to reflect population figures from the Census Bureau. The survey completion rate was 61% among panel members contacted to participate. This report is based on responses from 1,018 parents who had at least one child 13-18 years. The margin of error is ±3 to 5 percentage points.