Those most affected by the recent measles outbreak are children under 10 whose parents had chosen not to vaccinate. Many of these children had received either medical, religious, or personal belief exemptions which allowed them to attend school without receiving the recommended vaccines. In response to the outbreak, a bill has been proposed in the state of Washington that would eliminate any personal belief exemptions for vaccines.

Almost all states require vaccines for children who attend school and daycare, but even with requirements some children do not receive all vaccines. A 2014 Mott Poll report found that many parents support daycare policies to get kids up-to-date on vaccines. Among parents of children 0-5 years: 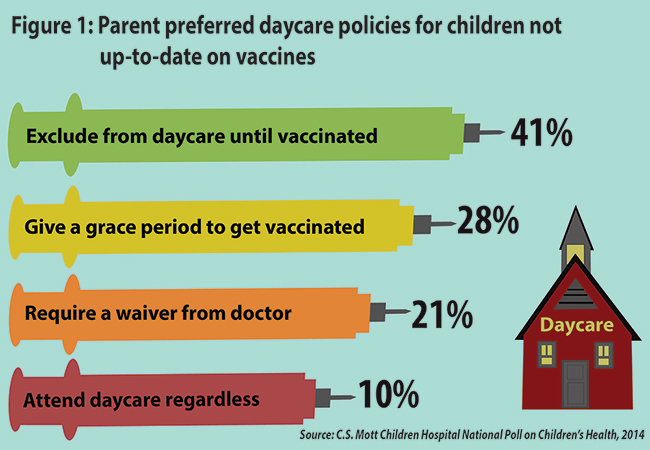 The 2014 measles outbreak at Disneyland in California resulted in lawmakers passing strict vaccine requirements which included eliminating personal belief exemptions for vaccines. After the law was passed, vaccine rates for some of the schools with the lowest vaccination rates increased by 20-30 percent.

The CDC recommends that the MMR vaccine (measles, mumps & rubella) be administered to children in two doses, one between 12 and 15 months old, and the other when they are between 4 and 6 years old. For more information, visit cdc.gov.