When teens are unable to drive themselves, they often rely on parents, friends, public transit and other non-motorized methods to get from place to place. Ride sharing services have recently emerged as another potential transportation option in many communities. Our April Mott Poll report asked parents of teens 14-18 about their opinions and concerns about their teens using ride sharing services. Parents and media across the country have been discussing the safety implications around teens using these services. Here’s a roundup of the conversation.

How old is old enough?

Even though teens under 18 aren’t permitted to use ride share services without an adult, 1 in 8 parents in the Mott Poll said their under-18-teen has ever used one. This was highlighted in a Detroit Free Press article, Study: Parents worry about teens using ride sharing services. Reporter Micah Walker notes that even though it violates the services’ terms, it can be difficult for drivers to verify the passenger’s age and parents often need transportation for their teens on short notice. If teens are using these services, then parents should prepare them by reviewing safety rules. “Parents should empower their teens to feel comfortable to speak out or refuse a ride,” said Mott Poll co-director Gary Freed, MD, MPH. “They should be reminded that they are getting into a vehicle with someone they do not know, and that it is essential for them to be especially attentive to anything that may risk their safety.”

Parents’ biggest concerns for their teens using ride sharing services were about the driver, including potential unsafe driving, speeding, and being under the influence of drugs or alcohol. This was featured in a Metro Parent article, Is it safe for teens to use Uber and Lyft? In addition to the safety concerns, reporter Jessica Schrader noted that about two-thirds of parents were worried about the risk of sexual assault. To help ensure teens’ safety, parents can use the ride share apps to track their teen’s route during the drive. “Parents can…use technology to track the route of their teen to make sure the ride goes as planned,” Freed said. “Having teens text or call their parent at the conclusion of the trip is always a good idea.”

Still concerned about the safety implications of ride sharing services? UM-Mott adolescent medicine physician Dr. Terrill Bravender offers some tips for people of all ages in a Michigan Health Blog post, 7 safety tips for riding Uber and Lyft. Dr. Bravender suggests passengers verify that the vehicle matches the listing on the ride sharing app, and confirming you’re the passenger by asking the driver to say your name. Dr. Bravender also recommends traveling with a friend and always wearing a seatbelt. And when in doubt, go with your gut. “If it doesn’t feel right, change where you’re going or say, ‘I’ve changed my mind and you can let me out here,” he said. “A good driver will do that.” 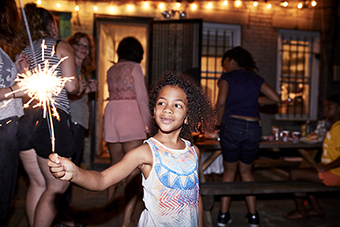 Minimize risks when celebrating with sparklers and fireworks