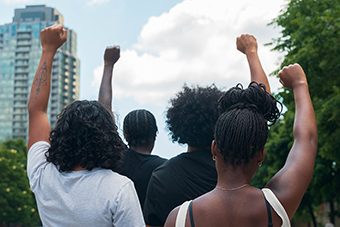 Recent months have seen demonstrations against police brutality and racism in many communities across the country. The C.S. Mott Children’s Hospital National Poll on Children’s Health asked a national sample of parents of teens 13-18 years about their views on teen involvement in demonstrations.

Black parents are more likely than White parents to report in-depth discussions with their teen (39% vs 29%) and to say their teen has attended a demonstration and/or other event about racism or policing reform (16% vs 6%).

Almost half of all parents (45%) say they are worried that their teen does not understand the risks of participating in demonstrations. Over one-third of parents say they are concerned that teens attending demonstrations could get arrested (39%) and don’t know their legal rights (35%).

Nearly twice as many White than Black parents (57% vs 31%) believe teens do not belong at police brutality demonstrations. Parents’ main concern is the chance of violence: 73% of parents worry the demonstrators may become violent, and 58% are concerned the police may use force against protesters. Concern about demonstrators becoming violent is higher among White parents (76% vs 62%), while concern about police use of force is more common among Black parents (77% vs 49%).

Half of Black parents (50%) and one-quarter of White parents (24%) say that thinking about police brutality and racism causes stress for their teen. White parents are more likely than Black parents to believe that teens are too immature to understand the real challenges that police face (46% vs 21%) and that demonstrations show a lack of respect toward police (46% vs 13%). 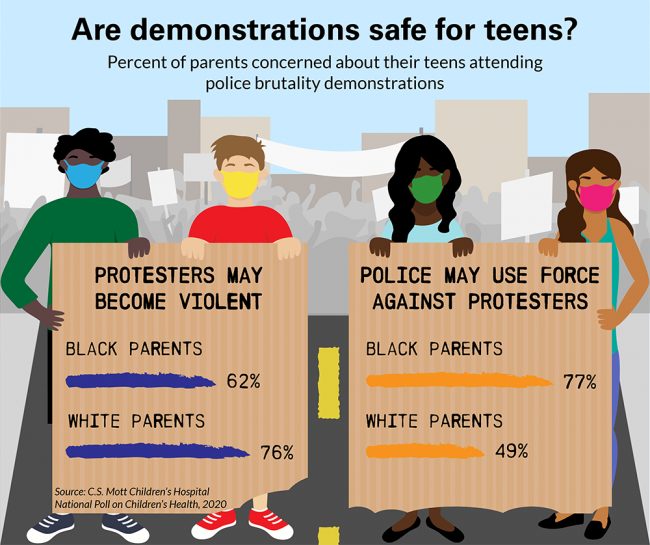 Over the spring and summer months of 2020, demonstrations were held across the country to protest police brutality and racism. This Mott Poll shows that it wasn’t just adults who were engaging with these topics, but that it was also a focus for many families, as three-quarters of parents talked with their teen about the demonstrations.

Through these conversations, parents may have noticed their teens exhibiting greater interest in the world around them, which allow parents to engage with teens to think about complex issues and consider different perspectives. However, parent responses to this poll indicated some reservations about their teen’s readiness to move from talking about demonstrations to participating in them. For example, many parents endorsed the belief that teens are too immature to understand the real challenges that police face and that teens do not understand the risks of participating in demonstrations, including the chance of arrest or violence.

An important finding from this Mott Poll is that 1 in 12 parents reported their teen attended a demonstration or other type of event focused on racism and police brutality; this represents a substantial number of teens moving beyond discussion to taking action. Moreover, although twice as many Black than White parents reported their teen participated in a demonstration or other event, both groups of parents had very high levels of support for their teen’s involvement.

Nearly twice as many White parents than Black felt that teens should not attend demonstrations. Parents were particularly worried that teens might be arrested and would not know their legal rights. This is an important area that parents and teens may want to discuss in greater detail, regardless of the topic of the protest or demonstration. Teens may have learned in school about the constitutional right to free speech, but may benefit from a parent explaining that state and local regulations can affect where and how people can protest. Parents also should make sure teens understand what to do if they are arrested or feel unsafe at a demonstration or in another situation. 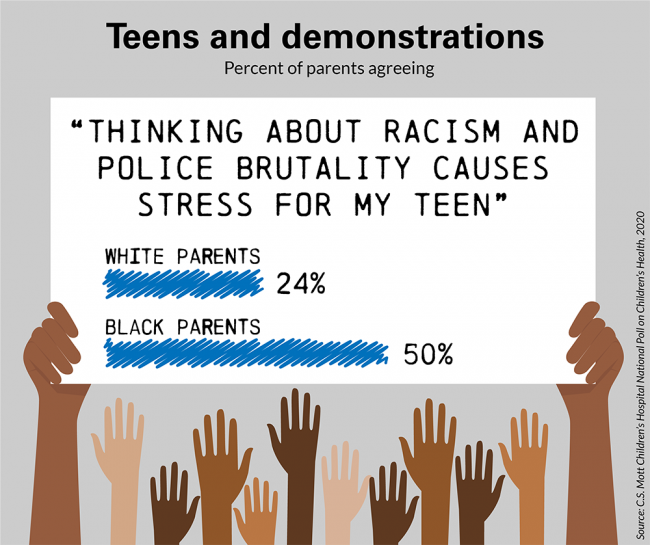 This report presents findings from a nationally representative household survey conducted exclusively by Ipsos Public Affairs, LLC (Ipsos) for C.S. Mott Children’s Hospital. The survey was administered in August 2020 to a randomly selected, stratified group of adults who were parents of at least one child age 0-18 years living in their household (n=2,027). Adults were selected from Ipsos’s web-enabled KnowledgePanel® that closely resembles the U.S. population. The sample was subsequently weighted to reflect population figures from the Census Bureau. The survey completion rate was 60% among panel members contacted to participate. This report is based on responses from 1,025 parents who had at least one child age 13-18 years. The margin of error for results presented in this report is ±2 to 3 percentage points and higher among subgroups.